Harvard University’s Lamont/Pusey Library presents selections from the photographic series Theodore Roosevelt – “How I Love Sagamore Hill” by Xiomáro (SEE-oh-MAH-ro).  The New York artist was commissioned by the National Park Service to photograph the interiors of the president’s “Summer Whitehouse” at what is now Sagamore Hill National Historic Site in Oyster Bay, New York.  The 26 color photographs featured in the free exhibit is on view now until December 31, 2014.  A limited edition photo e-Book, based on the series, can be downloaded for free at www.xiomaro.com. 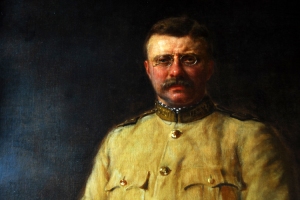 Xiomáro’s photographs show the house in a historically rare condition:  the 23 room mansion, usually chock full of furnishings and mementos, was nearly vacant as part of a 3 year, $7.2 million structural rehabilitation.  Apart from these images, the public will never see the interiors in this state nor can they visit the house until the structural work is complete.  The last significant body of interior photographs, in black-and-white with the interiors fully-furnished, is at the Library of Congress and was created in 1966 by Samuel Gottscho.

The rooms depicted are where significant international affairs were transacted when the president retreated to Oyster Bay to escape Washington, DC’s oppressive heat.  Negotiations to end the Russo-Japanese war began at Sagamore Hill for which Roosevelt became the first American to win a Nobel Prize.  The Panama Canal and the creation of the Navy’s Great White Fleet also have their genesis at the mansion.

Xiomáro’s exhibit is timely in that filmmaker Ken Burns, a Harvard graduate, is releasing The Roosevelts, a new PBS documentary that explores the political dynasty of TR, FDR and Eleanor Roosevelt.  The photographs are also unique in focusing, not only TR, but on his wife, children and servants to give a sense of what life was like in the household.  “Even though the rooms are nearly vacant, the photographs reveal the president’s imposing character and the intimate nature of the First Family,” explained the artist.  “These nuances get overwhelmed by the furnishings or are inaccessible during a house tour behind velvet rope barriers.”

Xiomáro is a nationally exhibited artist whose work has been covered by The New York Times, The Huffington Post and Fine Art Connoisseur.  Other commissions from the National Park Service include Old Mastic House at Fire Island National Seashore (home of William Floyd, a signer of the Declaration of Independence) and the farmhouse and art studios at Weir Farm National Historic Site in Connecticut (home of both J. Alden Weir, a founder of American impressionist painting, and Mahonri Young, a sculptor of the Ashcan School).