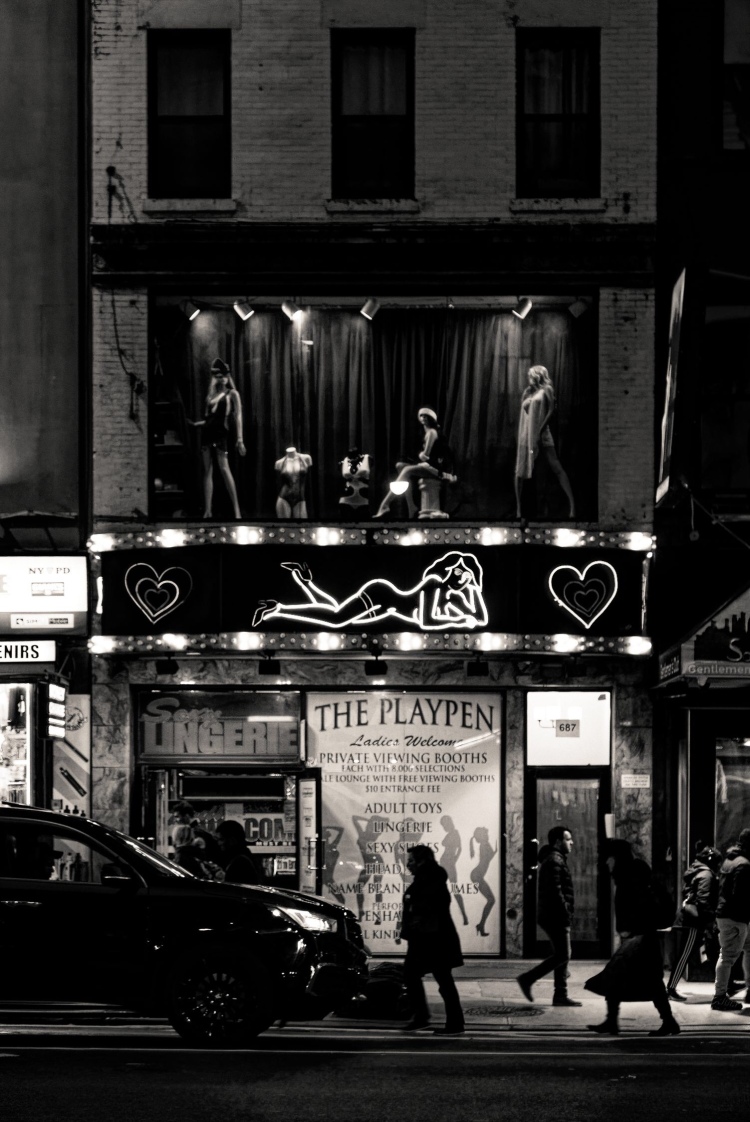 I was walking along Eighth Avenue between 44th and 43th Streets and it was as if I made a wrong turn onto Memory Lane – or I should say Bad Memory Lane. I was surprised to see that The PlayPen was still around. As far as I know, it’s the last such establishment of its type in the Times Square area. Last year, the building was purchased for close to $14 million. So perhaps it will eventually disappear and be replaced with a Starbucks or some other retailer.

Growing up, I remember when walking through Times Square was to be surrounded by places like The PlayPen, pimps, and druggies, as well as plenty of litter and overall squalor. It was always an uneasy experience for me.

Yet I have some friends who wax nostalgically for those gritty seedy old days. They resent the “Disneyfication” of Times Square and New York City in general. They long for the rough and tumble of the bad old New York that served as an incubator for the rise of new art forms like punk rock/new wave and hip hop culture – rap, break dancing, and graffiti. Interestingly, few of these friends actually grew up in New York or had to survive each day in its public school system. Many are transplants from other places.

One transplant – though not a friend, but someone whose work I admire – has a different take. In an interview he explains:

“Some folks believe that hardship breeds artistic creativity. I don’t buy it. One can put up with poverty for a while when one is young, but it will inevitably wear a person down. I don’t romanticize the bad old days. I find the drop in crime over the last couple of decades refreshing. Manhattan and Brooklyn, those vibrant playgrounds, are way less scary than they were when I moved here. I have no illusions that there was a connection between that city on its knees and a flourishing of creativity; I don’t believe that crime, danger and poverty make for good art.”

You may not agree with him, but his viewpoint is respectable, authoritative, and steeped in personal experience.

His name is David Byrne.

Xiomaro does not endorse any advertisements that may appear anywhere on this page.