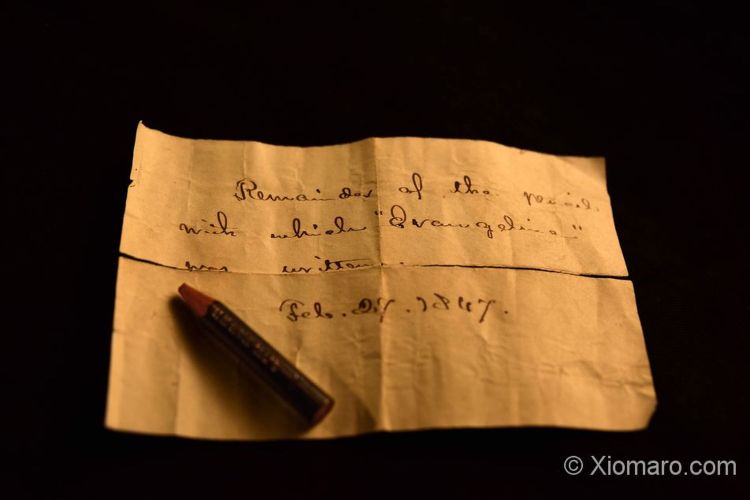 April is National Poetry Month. So, what better way for poetry lovers to celebrate than with this photograph, which has never been printed or exhibited before.

Henry Wadsworth Longfellow (1807-82) had a ritual of saving the pencil that he used to compose a poem, which he kept with a handwritten note to document the occasion.
When I was commissioned by the U.S. National Park Service to create an artistic photographic collection of Longfellow’s home in Cambridge, Massachusetts, I was given access to these pencils. They are stored in the archives and not typically out for public view. So, it was a rare opportunity to photograph them.

The pencil that remains is a short stub. And no wonder. Evangeline, composed in 1847, was well over 15,000 words. It was a hit in its time and is among Longfellow’s most famous works. Evangeline’s length did not deter readers in an age when there was no internet, television, or the myriad of other entertainment sources we have today.

The poem is a historical romance of an Acadian girl named Evangeline and her search for Gabriel, her lover. The Acadian people lived in the region of present-day Nova Scotia, New Brunswick, Prince Edward Island, and northern Maine. The Acadians were expelled from the land by the British during the French and Indian War (1755-64).

Evangeline is too long to quote here. But you can get a sense of Longfellow’s florid prose from the opening paragraph:

This is the forest primeval.
The murmuring pines and the hemlocks,
Bearded with moss, and in garments green,
indistinct in the twilight,
Stand like Druids of eld,
with voices sad and prophetic,
Stand like harpers hoar,
with beards that rest on their bosoms.
Loud from its rocky caverns,
the deep-voiced neighboring ocean
Speaks, and in accents disconsolate
answers the wail of the forest.