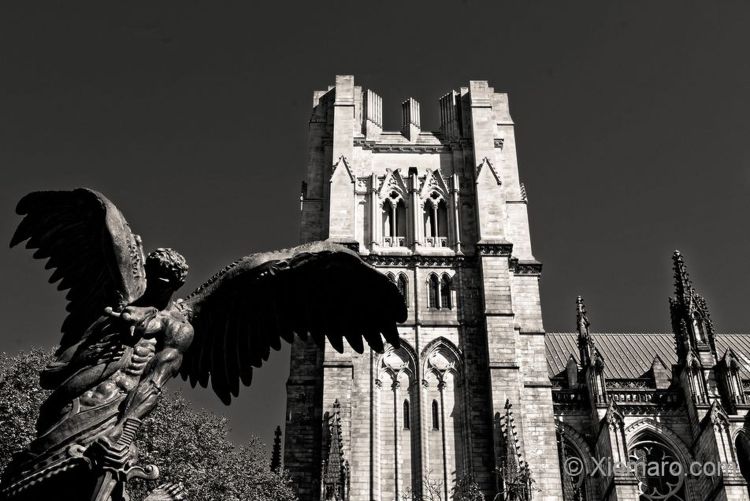 For some, Easter is not complete without attending a church service. For the Episcopal church in Morningside Heights, commonly known as St. John’s, that sense of incompleteness has lingered for well over a century.

Construction of the church began in 1892 and the first service was held in 1899. And, yet, the structure remains unfinished. The delay in building the remaining one-third of the church has been caused by a combination of design changes, lack of funding, and other logistical challenges.

One example can be seen in the photograph above. The southern tower – designed to house a bell – is cut off from its intended height. Construction of the tower began in 1982 and was halted in the early 1990s due to a scarcity of both funding and skilled labor. Indeed, an English stonemason actually had to be brought to teach the ancient art of stone carving to young unskilled workers drawn from the community.

On the left is a sculpture of Michael the Archangel, which is part of the Peace Fountain that was constructed in 1985. And in the church’s grand tradition of incompletion, to date, there is still no water in the fountain. The sculpture is a mélange of giraffes, Satan’s decapitated head, a giant crab claw, a gazelle, the double helix of DNA, and smaller statues made by children. As if that is not odd enough, the grounds by the fountain are known to have live peacocks, including an all-white one, roaming around.

I processed this image not long after I created the initial photograph in 2019. But it is only now that it is being publicly seen and made available as a print.